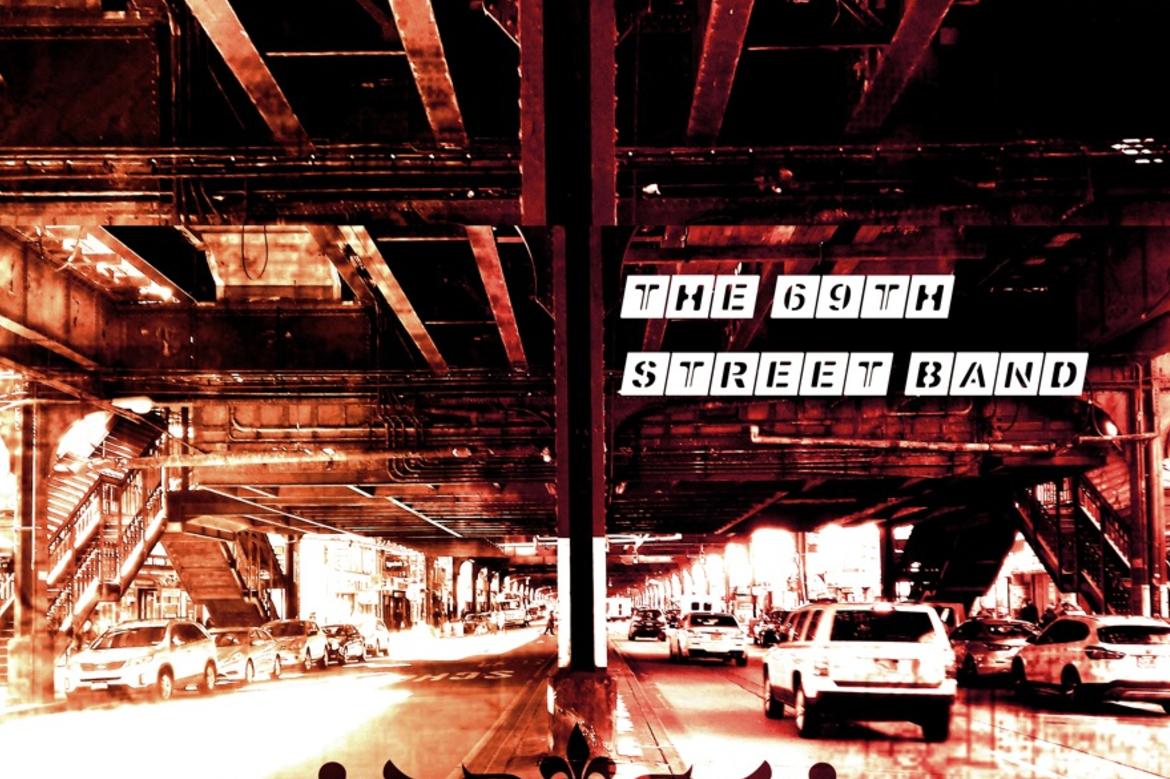 The 69th Street Band was formed in 2007 as a way to get Tom Paronis out of the house but has since then evolved into an "only in New York" outfit with a hybrid of styles ranging from old school Chicago Blues to R&B, rockabilly, country and jazz, particularly of the sort popularized by the classic "Acid Jazz" sax and organ combos helmed by giants like Jimmy Smith and Jack McDuff.  Tom cut his teeth on the South Side of Chicago in the late 1980s with the illustrious Buddy Scott clan playing a variety of blues, funk and R&B while also taking lessons with revered instructor Reggie "Guitar" Boyd.  After moving to Europe in 1990 he played in various clubs in Frankfurt, Germany.  Upon moving to New York in 1992 he played in several blues clubs, the late, lamented Dan Lynch's being the most frequent.  When impending parenthood led him to give up gigging in 1998 he assiduously taught himself the demanding but rewarding Travis/Atkins thumb picking style and began listening to a wide variety of African music and old Studio One reggae.  World Music was having its moment in those days in the Big Apple and it was possible to see top notch African, Cuban, Brazilian and Jamaican music at a variety of bars and clubs but now, like so much else, that era seems like a vision from a  lost world.  When the urge to play out reared its ugly head once more he wanted to find a way to incorporate these new sounds into his blues/country/R&B repertoire.  The natural choice for the bass chair was old chum Lenny Nelson, who has arguably played with every blues and R&B outfit in the tri-state area over the last few decades, including countless gigs with late, great Rolling Thunder drummer and pianist Howie Wyeth.  On percussion the band is fortunate to have the services of rhythm monster Abou Diarrassouba from the Ivory Coast.  Along with a propulsive, polyrhythmic style on drums Abou is a master of the djembe, talking drum, thumb piano and virtually every percussive instrument native to the African continent.  His resume includes stints with Alpha Blondy, The Wailers, Angelique Kidjo and many more.  The band was also fortunate to be able to frequently call upon the skills of legendary Cameroonian drummer and producer Jojo Kuo, whose background includes stints with Fela Kuti, Manu Dibango, Salif Keita and a host of other African and jazz notables.  Jojo brought more than just his drumming skills to the table.  On many gigs the band used his childhood friend Freddie Doumbe when Lenny couldn't make it; a hard grooving bass maestro who Tom sometimes jokingly refers to as "Richard Bona's bass player".  It's true but you'll have to ask Freddie about that.  Also worth mentioning was that Jojo brought multi-instrumental South African virtuoso Tony Cedras into the band for 2 1/2 wonderful years when he wasn't busy with Paul Simon or some of the many other acts who called on his skills.

The 69th Street Band's survival strategy was always to try and secure "house band" residencies at numerous clubs and the music gods smiled on us through the years, first at Bar 9 in Hell's Kitchen, then at Boom Restaurant in Soho and, most prominently, at the one and only Paris Blues in Harlem.  We stumbled into Paris Blues in 2012 when it was a sleepy neighborhood bar that had started to draw the remnants of the once thriving music scene at St. Nick's Pub on 145th Street after they closed (turns out they never had a liquor license and had been paying off an inspector until he retired and they got busted by his less corrupt replacement; only in New York!!).  The owner of Paris Blues, Samuel Hargress Jr., became a staunch supporter of our little unit and gave us the Saturday night slot and, a few years later, gave us every other Friday as well along with the occasional weekday sub gig.  At first the gigs were somewhat slow but within a few years Paris Blues had become the premier club in Harlem and seemed to have a special draw for foreigners.  The fact that the band spoke a few European languages between them and that the waitresses were native Spanish speakers may have played a part in the transformation but it is more likely that people were drawn to the ramshackle funkiness and old school authenticity of the place along with the frequent jam sessions that became a staple of the band's performances.  Several of the people sitting in were old friends of the band, some were visiting or touring out of towners who came to check out the action and more than a few were foreign visitors who wanted to be able to say they had jammed with the cats up in Harlem.  The band's repertoire changed somewhat over the years too as the jazz portion of the evenings began expanding.  Nobody would ever mistake us for a serious jazz band but let's just say we got a lot better at faking it.  On nights when Lenny couldn't make it the band began dipping into the wonderful Hammond B-3 format, to the point where Tom began entertaining notions of recording an organ disc.  The relentless gigging made the band razor tight and over the course of those years 3 CDs were released and every set usually featured 2 or 3 tunes of original vocal and instrumental tunes.

That wonderful scene, along with many other things, came to a crashing halt in March of 2020 when Covid-19 had the effect of a neutron bomb on the cultural life of our great city.  The buildings are still there but the people and the energy are gone.  Tragically, we lost Sam and a few other Harlem stalwarts to the virus and, as of this writing in December of 2020, the club plans to reopen but nobody is quite sure when or how.  Music scenes at the local level are always, even in the best of times, a fragile ecosystem and these are not the best of times.  It takes an unusual alchemy of players, venues, trends in popular taste and people willing to make the foolish, usually ill-advised leap into running a music club to make it all happen and Paris Blues benefited from the owner's strong personality and his commitment to live music (and the fact that he owned the building and was thus immune to rent increases), the deep pool of players in the area and the fact that Harlem itself was experiencing a renaissance, this time driven by  real estate and a generally safe environment, certainly compared to the Harlem of 20 years ago.  What does the future now hold?  I'm not sure but I suspect it will be some version of the travelling troubadour dependent on the kindness of strangers and perhaps aided by a bit of digital leverage.  The 69th Street Band has no intention of packing it in but we also realize that gifts like Paris Blues don't come along more than once in a lifetime.  In the last 2 years we also developed a relationship with a great, under the radar venue in Brooklyn aptly called The Brooklyn Jazz and Sports Club and we had a nice "Blue Monday" thing going on there until The Great Lockdown.  That venue is still standing and is committed to music so we may be able to pull one more "house band" rabbit out of our collective hat but right about now everybody's crystal ball is rather murky and making predictions would be ill advised.