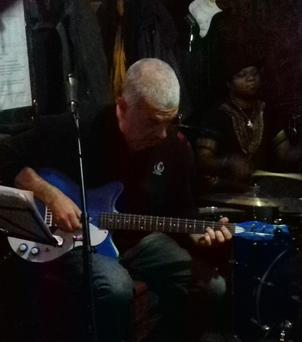 The 69th Street Band played its last gig at The Brooklyn Jazz and Sports Club on Monday, March 16, 2020 and what a spooky, weird gig it was.  The music was happening and should probably have been recorded for posterity as we all somehow sensed that the old world was giving way and no one knew quite what to expect next.  The bar was empty and there was a sense of foreboding in the air that somehow worked its way into the music.  Over the summer Tom could occasionally be seen with a portable PA playing on the Coney Island/Brighton Beach boardwalk and found, to his pleasant surprise, that it could be a very enjoyable way to while away an afternoon.  He also started playing outdoor happy hours on Friday at The Brooklyn Jazz and Sports Club but the change of seasons has put a stop to that.  Tom also found himself playing in bars and restaurants in Livorno, Venice and Florence in October of 2020 and now plans to make solo performance part of his musical future.  In fact, these solo outings were part of the impetus for the upcoming "After the Virus" release.  Strong friendships were formed between the 69th Street Band and the staff of many of the venues we played at over the years and both Paris Blues and The Brooklyn Jazz and Sports Club have every intention of continuing as live music clubs but nobody is quite sure how this will play out.  In a just universe the band will find itself performing at our 2 mainstay venues in the Spring of 2021 but nothing is certain in our current historical moment.  If you are interested in reaching out send an email to info@69thStreetband.com.