The 69th Street Band currently has 4 CDs in the marketplace with the fourth, the solo, all acoustic "After the Virus" having been released in the final minutes of 2020.  As of this writing, on January 1, 2121, it should be on all the major digital platforms within 5-10 business days.  We use TuneCore as our aggregation service and they release our product to all the major streaming services and online stores as well as several lesser known outlets.  Due to the near obsolescence of the CD format it was decided to release "After the Virus" only in digital format as the inevitable fate of our CDs has been to give them away at gigs whenever someone puts a large bill in the tip jar.  If someone is actually interested in a hard copy you can email our staff at info@69thStreetBand.com and we will personally spin up a physical disc and get it to you as soon as payment clears. 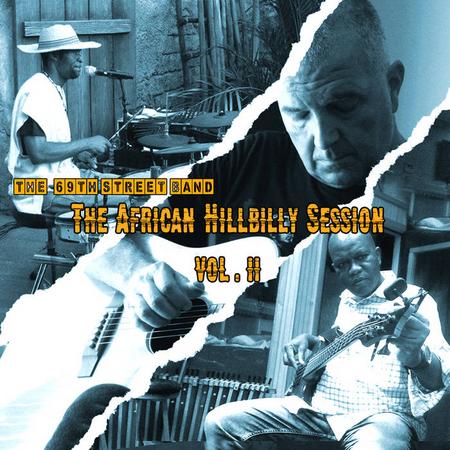 At some point in the last few years the 69th Street Band's weekend performances at Paris Blues started to be preceded by 30-40 minute solo acoustic sets.  Having a slight case of OCD disorder and being aware of all that could go wrong in a club where musicians donated equipment for the use of the bands that played there I would usually arrive 2-3 hours ahead of time.  Most evenings things went more or less smoothly and there was ample time to grab some Jamaican food across the street and chat with Sam, the owner, the staff and a few of Sam's crusty landlord buddies while the staff turned over in preparation for the evening shift.  By way of warming up I started playing a few tunes on an amplified acoustic guitar while Sam and a few other folks chatted in the "VIP section".  Sam was usually in his work overalls then and there were few, if any customers besides some neighborhood regulars.  These impromptu performances eventually became the low key start to the evening as well as a warm up for me and it is in that spirit that this recording has been made.  Kudos to recording engineer Ethan Fiks, who committed these tunes to disc in his congenial home recording studio in beautiful Ditmas Park, Brooklyn.  With 2 or 3 exceptions the tunes all came from the band's large and ever shifting repertoire. In some cases I’m playing the same parts I would have played with a rhythm section and in other cases I tried to compensate for the absence of a band by enlisting my thumb as bass player and using palm slaps on the guitar as a drummer.  Many of the songs are first takes and none were recorded more than 3 or 4 times and there is no overdubbing of either guitar or vocals; 100% live, warts and all. There are a few slight clams and hiccups but hey, if towering figures like Chet Atkins, Les Paul and Jerry Reed can put out product with a few mistakes than I can certainly follow suit.  The key thing, as always, was the groove.  If the tune had a nice flow and energy then it was a keeper.  To put yourself in the proper frame of mind imagine you’re in a funky, mostly empty club with the owner and a friend or two having a drink and engaging in small talk and in no particular hurry to be anywhere else while an anonymous guitar player quietly strums in the background.  Hopefully the neighborhood joints, whether they’re in Harlem, Chicago, Memphis, Grenada, Rio, London, Dakar, Austin…..wherever, will find a way to survive the immense changes we’re going through because it is my firm belief that small scale local music is the basic organism that facilitates music at all other levels.  Without that we’re headed into a much bleaker world.  But enough of that!  Hopefully this modest outing will tickle a few auditory nerves and I like to think Sam himself is listening at that great juke joint in the sky, tapping his foot, smiling at the ladies and happily scanning the joyful crowd of music lovers.  As the old sergeant liked to say “Carry on….carry on!” 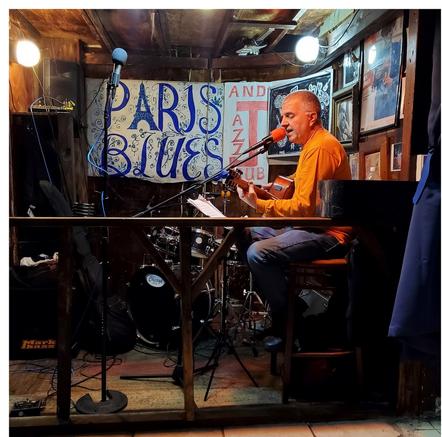 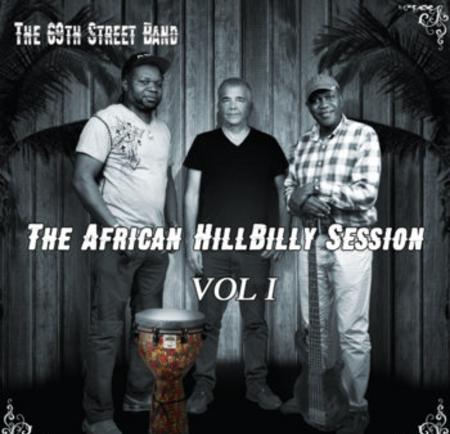 ​​This disc was actually meant to provide some filler for "A Brooklyn Afternoon" but the session went so smoothly that we decided to release the whole thing as a separate disc and it is considered by some to be the sleeper star in the 69th Street Band firmament.  The sound and the tunes form a cohesive whole and there are no mistakes, at least no egregious ones.  Many of the gigs we were doing at that time found us wedged into the back corner of a small bar or restaurant and Abou would usually play djembe on those gigs, sometimes while sitting on a cajon that he would also play.  The African members of the band were always drawn to the country/bluegrass/rockabilly portion of our repertoire, hence the name.  We also received enough comments on the unusual mix of African percussion mixed with roots American music to make us feel we might be on to something.  The faux tropical photo was actually shot in a small room in a fifth floor walkup in the Bronx but through the digital wizardry of ace producer Phillipe Allaert it was transformed into an image more in sync with the music. 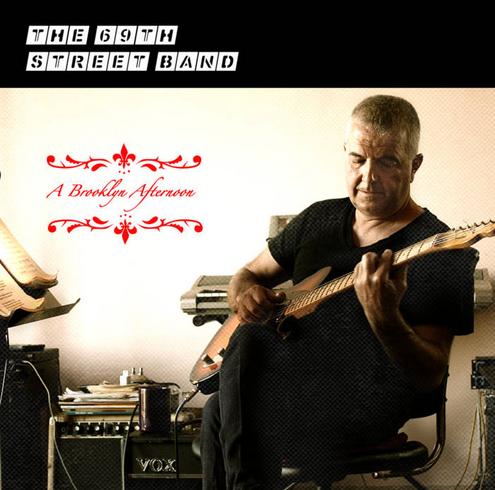 ​The 69th Street Band on Bandcamp

This is the "official product" as it consists of 100% original material and was given a champagne sound on a beer budget by producer/multi-instrumentalist Phillipe Allaert.  Along with being a superb drummer Phillipe served as producer and drummer for the Belgian bands Vaya Con Dios and Zap Mama back in the day and, in fact, produced an album in Muscle Shoals for the former group in the era of major labels and big recording budgets.   That was clearly not the case this time around and most of the recording was done in my Brighton Beach pad in a specially constructed tent made of burlap moving blankets in my living room where I would do 3 passes of guitar and 3 passes of vocals along to my home made, click-tracked demos while Phillipe played around with and adjusted his collection of high-end mics, some in the tent and some placed in front of my guitar amps.  The drums and backing vocals were done off site but 2 of the other players, Lenny Nelson and Marina Makarova, also recorded their parts in my living room (but not in the burlap tent) and badass B-3 player Adrienne Fennemore recorded her parts in her studio in Harlem.  2 of the tunes, "Neon Blue" and "Big Shot", began life as instrumental tracks that Phillipe had created but he (rightfully) insisted that the release should have 10 tunes and told me to come up with lyrics for the tracks.  "Neon Blue" is about a lad from the provinces whose lady leave leaves him for ostensibly bigger and better things while "Big Shot", I now realize, is obliquely about the decades I spent in the commodity biz.  The other eight tunes were things that popped out of me in the years leading up to the recording.  The whole process was fascinating and all concerned are quite happy with the way the music turned out but it made me wonder if I would have had the patience to go with the layered approach to making music had this all happened in the time of physical product.  Given the current state of the world and the music biz any future recording will probably be done in the "Let 'er rip!" live format but it is very nice to have at least one professionally made disc in the catalog and when some of these tunes come through the speakers from my cloud based collection, possibly juxtaposed by Dire Straits on one end and Alan Jackson or Groove Holmes on the other I find myself thinking "Hey...that's us!  Not too shabby...we don't suck!".

The 69th Street Band on iTunes

The 69th Street Band on Spotify

This collection of tunes was actually recorded in 2015, before either of the previous releases, and sat un-listened to for almost 3 years until Tom and producer/drummer Phillip Allaert finally gave it a spin and found that it wasn't too bad.  Tom's recording career is almost completely due to his African picking pals, all of whom have extensive producing and recording experience, and were after him to document our musical adventures at the bottommost rung of the NYC music ladder for many years.  Drummer Jojo Kuo was the most prominent of these voices and finally on a nice spring day in May of 2015 Tom, Jojo and Freddie Doumbe traipsed into Brooklyn Recording Studios and spent a pleasant afternoon doing what was essentially a barroom set.  There was no plan, no preparation and we wound up playing the tunes the three of us had often found ourselves playing at Boom Restaurant in Soho but without the willowy Eastern European and Latin waitresses who helped make that a special venue for the band.  The tunes have a rough quality and this could rightly be considered the "bootleg" release in the band's catalog.  In particular, I wouldn't mind having the opportunity to re-record some of the vocals but it is what it is and the whole thing has a nice funky quality to it that takes me back to a wonderful period in time when I hear it.  Of particular note is the telepathic tightness of Jojo and Freddie.  These guys have been playing together on stage and in the studio since their teens and it shows.  As a rhythm section they deserve to be known alongside Sly and Robbie, George Porter and Zigaboo Modeliste and a select few others.  Also worth noting is that 2 tunes that subsequently appeared on our later discs, "Martino's Groove" and "Minor Blues" made their first appearance here.  I figured that if I'm paying for a session I should commit at least 1 or 2 originals to disc so I specced them out for the band at the session and, pros that they are, Jojo and Freddie did the fledgling numbers justice.

The 69th Street Band on Amazon:

The African Hillbilly Sessions, Volume I